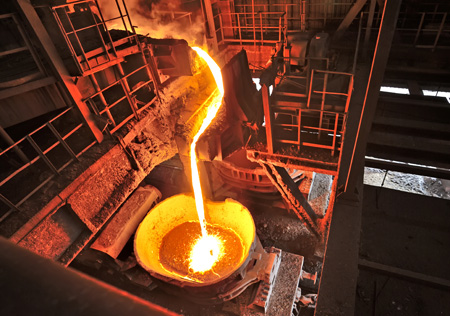 Solution
Dynamic reactive and harmonic current management are implemented on the arc furnace connected to the LV distribution side. One set of Delta PQC series APF (single unit capacity 750A) was implemented as shown below:

Effectiveness
The effectiveness of the PQC active power filter was significant, as shown in the data below:

Current THD before and after PQC implementation is as follows:

Voltage waveform and PF before and after PQC implementation are as follows:

Conclusion
Delta’s PQC APF has been running steadily at JCG for over two years. PF is steady at over 0.96; current THD was reduced from 28.9% to 4.4%; and current, voltage, and PF are now better than the national standard and power distributor requirements . The failure rate of both the arc furnace and electroplating equipment were significantly reduced. By decreasing the apparent current, thermal losses of the circuit were reduced. Meter monitoring shows energy saved to a specific degree. No resonance of the capacitor banks is reported for secure grid stability.