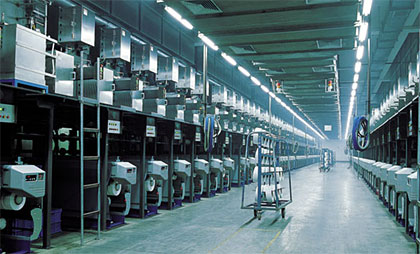 Industry background
Major processes in chemical fiber production include polymerization, filament drawing, cooling, and wastewater treatment. A VFD winding machine is the major type of electrical equipment used for filament drawing. In polymerization, TPA after mixing, heating, and reacting is transferred to the filament workshop through channels. The mixer, centrifuge (VFD), and filter tower are the main types of electrical equipment used in polymerization. There are also HTM furnaces and recycled water treatment processes that need VFDs for pumps.

The harmonic content varies from VFD to VFD and from model to model. In filament drawing and wastewater treatment, the total harmonic distortion (THD) of transformers is severe, usually over 25%.

Solution
By referring to onsite conditions and a pilot test and assessment, a Delta PQC series APF with model name of PQCA-400-75-375C4 was thus installed at the secondary side of each of all the 32 distribution transformers in the new factory. The single transformer solution is illustrated below:

Effectiveness
The effectiveness of the PQC active power filer is significant, as shown in the data below:

Current waveform and THD before and after PQC application are shown below: