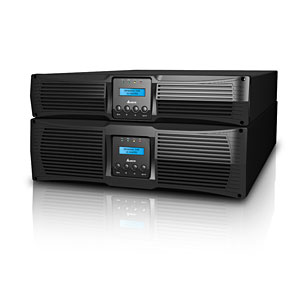 With a 1+1 parallel redundancy function, the Amplon RT series provide higher reliability for rackmount solutions. In engineering, redundancy is the duplication of critical components or functions to increase systems reliability. By incorporating multiple copies of a system’s most critical components into the overall design, the system is prepared to continue to operate in the event of a power event, or of a failure by one of those components. In the case of an uninterruptible power supply, redundancy is the extra power it can offer as a stand-by during a power outage, until either the main power supply returns, or a generator begins to offer another source of power. UPS power can also keep a system running temporarily so that it can be powered down in an optimal way, which is the safest course of action to protect the hardware and the data. Designed in a rack or tower configuration with an LCD display, the Amplon RT series can include an optional external battery pack to extend power for an even longer period of time, for optimized protection of protect critical applications.

Processors and memory use more power than any other components within a server, and their demands for energy can significantly increase a company’s operational expenses. As server technology has developed and become more sophisticated over time, the amount of power that servers need to function has increased more and more. After processors and memory, the third largest drain on server power is efficiency loss from the power supply. The efficiency of a power supply is dependent upon its load, and loads with power utilization rates between 50 and 70 percent are considered most efficient. Power consumption, and therefore overhead, can be greatly reduced by a highly efficient power supply. The Amplon RT is one of the most efficient rackmount UPS units, and its TCO, or total cost of ownership, reflects that. The Amplon RT series outstrips rackmount solutions offered by competitors by offering reliability and secure protection without demanding vast quantities of expensive energy in return.