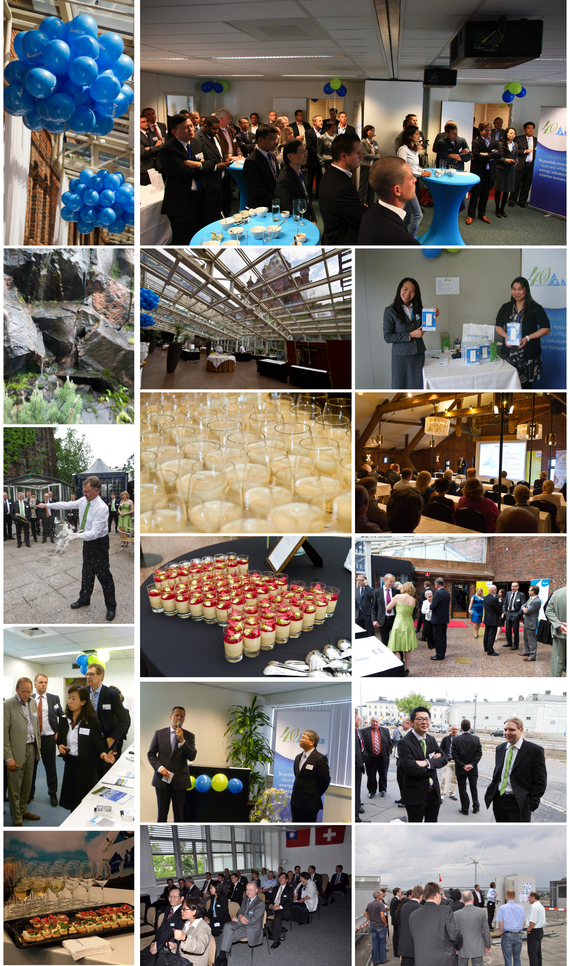 Delta celebrated its 40th anniversary on 16 June 2011 by hosting customer events in Helsinki, Bern and Hoofddorp. The events brought together Delta’s customers, partners and other stakeholders.

Delta Energy Systems (Switzerland) AG in Bern invited well-known figures from politics and business, as well as customers, suppliers and partners and other stakeholders to join Delta’s 40th anniversary celebrations.
We were very proud to welcome Mr. Fadah Hsieh, Ambassador of Taiwan and Mr. Alexander Tschäppät, the Mayor of Bern. Altogether we hosted around 30 VIPs. Delta Bern management team started the event by offering the guests a very delicious Swiss soft drink.

Peter Hofstetter first introduced Delta and its business divisions to the audience. He presented Delta’s mission, future-oriented products and international network and organization. The audience also got an insight into our company as a very interesting employer. Next, Hans-Peter Glauser presented our hybrid system in detail. Then we took our guests to the roof of the building for a real site visit. Our guests presented several questions, which Hans-Peter Glauser was able to answer professionally, broadly demonstrating our competences. The carefully prepared exhibition showcasing several of Delta’s key products was well received by the guests. Much discussion took place at the event, supported by the Bern management team and R&D teams. Especially LED streetlights attracted great interest from the Mayor of Bern, since he recently launched a new project to acquire new streetlights for the city. The discussions continued with tasty finger food and wine. One could only find happy faces among the guests, who were having engaging discussions with our teams.

Our guests were impressed by our international organization and wide product portfolio. “I now have a much better understanding of what Delta is and what it does,” was one of the most frequently heard comments by the guests. The successful event will doubtlessly enable smoother cooperation in the future. The careful preparation of the event was a good investment.

On a beautiful, sunny summer day, nearly 60 customers, stakeholder representatives and hosting Delta representatives gathered to Restaurant Sipuli at Katajannokka in Helsinki. The beautiful old building surrounded by the Baltic Sea offered a magnificent and elegant setting for Delta’s 40th anniversary celebrations. Many of the participants have been our customers for years, even decades, so many of our hosts had old acquaintances and friends to celebrate with.

Mr. Jorma Autio, the CEO of Delta Finland, opened the event by welcoming the guests and introducing Delta’s hosts and new employees. Mr. Autio continued by telling guests about Delta’s story, green buildings and the journey from the first telecom power systems manufactured in Finland to Delta’s present wide portfolio of products and solutions. For many customers, it was very interesting to learn more about Delta’s products outside of the telecom power systems portfolio.

Mr. Matti Heikkilä, Product Manager for Controllers, then took the floor to share his energy, CO2 and cost saving tips enabled by Delta’s controllers. He also introduced the cloud service developed by Delta India for utilizing controllers, as well as the opportunities for remotely monitoring telecom sites. After the official part, the participants moved to the inner courtyard for a toast to Delta’s 40th anniversary and a ceremonial opening of a champagne bottle with a sword. A delicious tapas buffet was served indoors, featuring, for example, salmon with fennel, shrimp chili minitoasts with black pepper aioli, Italian and Spanish cold cuts, Caesar salad and olives, and for dessert, licorice and white chocolate mousse with raspberries. After the dinner, it was time for games and other activities: reaction wall, dance pad and a rally game. Finnish soul singer Sami Saari and his orchestra performed two sets during the evening.

Many participants gave their feedback already during the evening. We received overwhelmingly positive feedback especially on the arrangements, atmosphere and venue, which was described as elegant and stylish. “The setting is elegant and lovely, and everything went smoothly. The presentations were interesting and their contents were easy to understand,” said one guest.

Delta celebrated its 40th anniversary at the European head office in Hoofddorp, the Netherlands, on 16 June 2011. The guests included company personnel and their family members, customer representatives, business partners, representatives of government organizations, the local Councillor and representatives of local media. The Delta Group achieved record net sales of USD 6.6 billion in 2010. This success and the company’s 40th anniversary were celebrated in Europe on 16 June 2011. Events were held at Delta’s European headquarters in Amsterdam (The Netherlands) and at the branch offices in Espoo (Finland), Bern (Switzerland) and Glasgow (UK).

Jackie Chang, President and GM of Delta Europe, opened the event with a speech and a company video, followed by the speech of Mr. Hawk Chang from the Taiwan Shian-Chin Association in the Netherlands. Then the Delta BU, Innergie and Vivitek representatives presented their latest product developments to the guest. After that, our local Councillor Mr. A.Th.H.van Dijk congratulated Delta on its 40th anniversary and explained how important it is to have a pioneering green company such as Delta Electronics in the area of Haarlem/ Amsterdam. While enjoying drinks and a nice buffet, our guests took a look at Delta’s success stories and demonstrations of some of our latest products. The atmosphere was at the same time professional and pleasant. The presentations were brief and educational. At the end of the event, many visitors said that Delta can be very proud of its unique achievements. We Delta employees shared this feeling and were happy to celebrate this special event together with our valued partners and customers in Europe.

16th June 2011 - we held an open day in the Delta UK office to celebrate the 40th Anniversary of the opening of Delta Electronics. We wanted to share the day with our partners in business and invited customers, suppliers and associated companies. We also invited some dignitaries from South Lanarkshire council and The Scottish Parliament and government support organisations, the SDI and also Scottish Engineering. We also had visitors from the Taiwanese chamber of commerce.

The day was well attended with 25 guests visiting and sharing the day with the 35 Delta employees. Each guest was welcomed with refreshment at registration and then was able to tour the product displays which had been exhibited.

Seventeen separate product groups were laid out and Delta staff gave the visitors details of the functionality and markets for each product group. The highlights of the displays were the comprehensive range of Server power unit, the products designed and developed in Engineering in East Kilbride which have now been transferred to mass production in Asia. We also had a range of products showing the hidden Delta called ‘DELTA ON THE INSIDE’, to show where consumers had benefited from Delta supplied parts in their X-Box, PS-3 play station, LCD TV and the desktop computer. An example of a digital classroom was set up using the Delta extreme short throw projector and the Promethean interactive board, allowing visitors to trial writing presentation and lessons on the white board which would be saved onto the computer.

We included a range of components supplied by Delta such as magnetics, planar transformers, EMI filters and FFTH drivers as well as a range of blowers and fans. The latest products for Delta were displayed in the Delta into the future section where we have Solar panels and inverters, Electric vehicle charging stations, E paper, LED lamps and Delta medical devices. To supplement the exhibition we used 4 short throw projectors to display data pages and WEB pages giving an interactive source of data of the products on display. We included the Vivitek products as well, with a static display of the standard product and one of a full HD resolution product. The displays finished off with our example of a home cinema in our dark room, projecting a blue ray disk on full 1080P resolution LED lamp H9080 projector. To add to the experience we set up the room with cinema style chairs and used a high quality sound system to complete the full Cinema effect.

The visitors were then taken on a tour of the facility and could view the office environment and the design labs and testing chambers. The full group was then brought together and then welcomed in the presentation area - set up with decorated dining tables with table centre displays - by Arunima Sinha who welcomed everyone and thanked them for attending and then introduced some brief presentation on Delta Electronics:
Gordon Walker presented Delta in the past, where it had grown from to today, Jim Boyle presented Delta at present, the range of the products we offer and Alistair Coltart presented Delta in the future, how he expected the product range to grow and change. The corporate DVD was shown emphasizing the Delta Success story. A full and delicious meal was then served with refreshments and the visitors were able to sit with the employees around the tables and jointly enjoy the rest of the celebrations. Each visitor was given an Innergie product as a reminder of their visit.