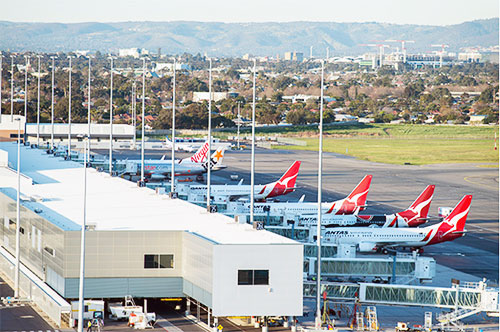 As with all airports, Adelaide Airport’s efficient operation, security and safety relies heavily on its ability to communicate real time information seamlessly both internally and externally. The two communications rooms that were upgraded are both part of critical airport operational systems. Both rooms called for specific systems that required minimal footprint due to the limited space available in each room. Some of the crucial systems running out of the southern room include baggage handling, flight information display system, airport management systems, public address systems and terminal televisions.

Delta’s DPH Modular Uninterruptable Power Supply (UPS) system was installed at the southern communications room as part of the upgrade. This is the first time this type of system has been deployed in the Australian and South Pacific region.

The built-in redundancy of the Modulon DPH Series UPS guarantees a continued power supply for mission critical applications, and the fully fault-tolerant design offers self-redundancy for the control mechanism, cooling and power modules. Mean time to repair (MTTR) is close to zero, due to hot-swappable functionality for all critical components. In the event of failure by the main module, full control logic enables the system to self-synchronize and switch to the backup, for a seamless transition with no disruption to operations.

In the northern communications room a core switch cabinet solution was installed, which included two units of Delta RT 10kVA/9kW rackmount UPS to dual power rails with external bypass modules. Beneficially, these units are capable of twelve minutes uptime at 9kW and provides redundancy for dual corded equipment up to 4.5kW.

With these modifications and customisations, the new Adelaide Airport communications room is running at 30% capacity, allowing the capability to load more over time as the airport continues to grow.