Wherever continuous power is needed, there is a need for Uninterruptible Power Supplies (UPS). UPSs act as power brokers, facilitating a continuous distribution of power throughout an infrastructure, no matter the size of an organization or how greatly its power usage fluctuates. UPS backup power strategies are conventionally deployed in two forms, centralized and distributed, and from a technical standpoint they serve the same purpose, namely, to keep power ceaselessly flowing, particularly during adverse conditions (i.e., surges, brownouts, fluctuations, total power outages, frequency differences and other power issues).

While they may serve the same purpose, they fulfill it in different ways. Both solutions have distinct advantages and disadvantages, depending on the short- and long-term needs of an organization. For high-visibility and high-consumption industries, such as transportation, government/public, IT, and financial service sectors, where power supports vital applications associated with an acute internal and external sense of urgency, maintaining continuous and ample power is of paramount importance.

In the following sections, we’ll discuss the different ways centralized and distributed UPSs provide the flexibility companies need to scale their power protection in concert with their existing needs and future growth.

Distributed UPS are either mounted directly in the server rack or adjacent to it, so that (potentially) every server has UPS hardware connected to it with little-to-no space between the hardware and servers. Distributed UPS can be likened to having torches lighting the way every 15 feet of an area, whereas centralized UPS could be likened to a giant strobe light that disperses light in a 100-foot radius. If one of a decentralized UPS’s torches went out, it would only darken the 15 feet that surround it, while if the strobe light of a centralized UPS was temporarily snuffed, everything would go dark, metaphorically speaking.

With an enterprise’s IT network and power grid, the greater the distance between a server and its associated UPS, the greater the risk of power issues, such as: noise interference, grounding, and/or loose connections. Because distributed UPSs are mounted in, or adjacent to, server racks, shortening the distance between them, the possibility of faulty wiring developing along the power chain is substantially reduced. By providing self-contained auxiliary power all along the network, the kind of mass power disruption that can occur if a centralized UPS is deployed is circumvented.

Ease of Installation and Integration

Lightweight and greater portability make distributed UPSs much easier to install and move, which for companies that need more mobility in their data centers ideal. Proximity to server racks also optimizes the position of distributed UPSs to Ethernet connections.

Because distributed UPSs are not designed to support an entire enterprise’s network, but rather one server rack within the network, the initial upfront expense of purchasing this solution is considerably lower than that of centralized UPSs, which are often overkill for small- to medium-sized businesses (SMBs). Compact UPS lifespans tend to mirror those of server hardware, enabling organizations to economically synch server hardware and backup UPS upgrades. When smaller companies need to expand their backup power protection, they can opt to do so by increasing the redundancy of their system, through adding additional UPSs, as they need them, for significantly less than it would cost with a centralized UPS.

As the name suggests, centralized backup infrastructure consists of one or two large UPSs placed along a server room’s perimeter, at the end of a server row, or in an independent location nearby. Centralized UPSs are akin to a giant power protection net that encompasses an organization’s entire network.

For larger companies the single-phase power protection common of smaller, decentralized UPSs is likely to be inadequate for their power protection needs. Centralized UPS is designed with high-density server hardware needs in mind. As these typically run on three-phase power, the more robust UPS is the suitable choice, in that it can provide protection to both three-phase and single-phase loads. Servers are now run considerably higher than they were in previous eras, but hotter temperatures can dramatically shorten the lifespan of UPS batteries. The remote location of centralized UPSs protects their batteries, thereby extending their lifecycle and reducing time-consuming and costly premature battery replacement.

Stable Output and Better Use of White Space

Centralized UPSs generally run online, double-conversion architecture, which produces greater stability in the power curve and eliminates most power disruptions (i.e., spikes, distortions, surges). Decentralized UPS, on the other hand, is designed to react to power distortions (via line-interactive architecture), which can mean that anomalies are passed along to end devices. Additionally, in a centralized backup architecture, UPSs are kept apart from server racks, freeing up critical space for server hardware.

To increase capacity with distributed backup architecture, data support staff must manually add additional UPSs to each server rack, a tedious and inefficient process for large-scale organizations. In addition to reducing the amount of critical server rack space available for server hardware, this also taxes data tech staff by doubling the equipment they must monitor and service. Creating redundancy with centralized UPSs is a one-step process, making it substantially less time-consuming.

Implementation of centralized UPS leaves a much bigger footprint and takes a considerably greater amount of coordination to plan, install, setup, test, and launch. Companies tend to have “eyes bigger than their stomachs”, when it comes to selecting and implementing centralized UPS. Because organizations overestimate how much capacity they need from their centralized UPS, as much as 25% of the energy they consume is wasted. The excess energy generated in this all-too-common scenario manifests as excessive heat, which in turn creates greater demands on cooling systems in data centers, causing energy costs to spike. It’s not uncommon for these UPS to necessitate a dedicated HVAC system to manage the additional energy output.

In addition to the additional costs created by the increased demand for data center cooling, centralized UPS tends to have a substantially higher price tag than their lighter, distributed counterparts.

Modular UPSs, such as the Delta Modulon DPH Series, can create a stronger backup architecture for many mission critical operations in mid-sized datacenters. With modular UPSs, organizations can boost backup system redundancy by simply plugging in additional power modules as needed, thereby garnering the efficiency of a centralized backup system and the incremental growth (and reduced costs) of a distributed system. The fully rated, three-phase Modulon DPH Series offers the highest possible availability: 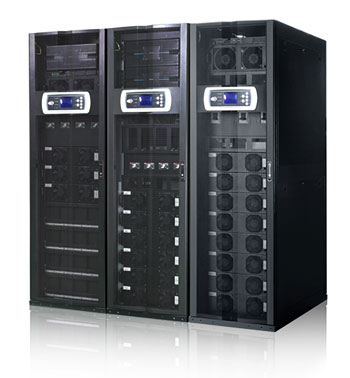 Alternately, a hybrid backup architecture that incorporates central and distributed UPSs can offer a solution that covers more bases and offsets the weaknesses of one system with the strengths of the other.

As the preceding discussion illustrates, determining which backup solution is best will depend on a complex matrix of variables, such as your organization’s ability to monitor or manage a given backup system, the cost-benefit ratio of either solution, present server rack utilization capacity and future needs, current and projected power demands, and more technical questions, such as whether or not your server uses single-phase or three-phase power. In addition, both options have advantages and disadvantages, but by giving full consideration to each UPS solution and the needs of your enterprise, managers can better determine which of these strategies is best.

* Recommended but not limited to these models.